After reading Gandhi’s autobiography, the answer is a clear and unequivocal no.

Mahatma Gandhi, a Hindu Vania born in coastal Gujarat, helped lead India to independence and has inspired movements for non-violence, civil rights, and freedom across the world.  Many know that Gandhi also undertook many dietary experiments, but relatively few people know how disturbed he was by the treatment of cows and buffaloes in India, and how committed he was to lead a life free of animal products. 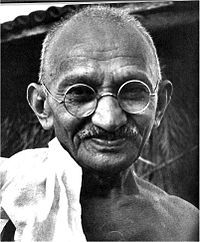 Gandhi’s autobiography is littered with comments referring to his unhappiness with the way in which cows and buffaloes are treated on farms across India, and his strong conviction that humans don’t need milk beyond what they are given by their mothers as a baby.  Indeed, in 1912, Gandhi along with his good friend Hermann Kallenbach, pledged to abstain from milk at Tolstoy farm in South Africa in 1912.

Gandhi’s decision to follow a vegan diet took place at a time when there were relatively few vegans around the world, and there was very little reliable information about the health implications of adopting such a diet.  Today we have evidence from long-term studies showing that it is possible for people following a vegan diet to live as long and healthy lives as those following any other diet, provided they maintain an adequate supply of vitamin B12.  We also have organisations such as The Vegan Society, who provide up-to-date, reliable, nutritional guidance for those following a vegan diet.  Unfortunately Gandhi had no such information to rely upon, and B12 as a nutrient had not been isolated or discovered.

In the latter stages of his life, Gandhi fell very ill.  Initially, he vehemently resisted his doctor’s recommendations to take milk, meat broth, or eggs.  But towards the latter stages of his illness, Kastubrbai (his wife) persuaded him that his vow not to drink milk had only considered cow and buffalo milk, and that drinking goat milk would not violate his vow.  Gandhi was aware that drinking goat milk sacrifice the spirit of his vow, but his desire to live was great.  He decided to take goats milk, but the decision filled him with remorse, and he continually thought of ways in which he could give up goat’s milk.

If Gandhi had access health/medical/nutritional we all currently benefit from today, it is very likely that it would have been able to treat his health condition without needing to use animal products or violating his vows, in words or in spirit.  After reading his autobiography, I have very little doubt that if he was alive today, he would adhere to a strict vegan diet and would be a strong supporter of organisations such as the Vegan Society which promolgate reliable and helpful information about a plant-based lifestyle in a professional, non-violent, and non-confrontational way.

Quotes from Gandhi’s autobiography about milk

For the convenience of anyone interested in finding out more about this topic, I have provided below a list of quotations from his autobiography, and the associated chapter titles.  If you have any more to add to this list, please get in touch and e-mail me at:  sagar[at]jainvegans.org

You can read his autobiography in full here: http://www.mkgandhi.org/autobio/autobio.htm

“It is my firm conviction that man need take no milk at all, beyond the mother”s milk that he takes as a baby”

“I sought the help of the doctors, vaidyas and scientists whom I knew, to recommend a substitute for milk. Some suggested mung water, some mowhra oil, some almond-milk.”

“I should be greatly obliged if anyone with experience in this line, who happens to read this chapter, would tell me, if he has known from experience, and not from reading, of a vegetable substitute for milk, which is equally nourishing and digestible.”

“so long as I had not taken the brahmacharya vow I could not make up my mind to forgo milk.”

“I had long realized that milk was not necessary for supporting the body, but it was not easy to give it up.”

“While the necessity for avoiding milk in the interest of self-restraint was growing upon me, I happened to come across some literature from Calcutta, describing the tortures to which cows and buffaloes were subjected by their keepers.”

“Mr. Kallenbach said, ‘We constantly talk about the harmful effects of milk. Why then do not we give it up? It is certainly not necessary.’ I was agreeably surprised at the suggestion, which I warmly welcomed, and both of us pledged ourselves to abjure milk there and then.”

The quotes in this chapter refer to a time when Gandhi was experiencing pleurisy, a condition involving inflammation and mucus in the lungs.  It is associated with pain, aggrevated on by deep breathing and/or coughing….

“Dr. Jivraj Mehta treated me. He pressed me hard to resume milk and cereals, but I was obdurate.”

“Religious considerations had been predominant in the giving up of milk. I had before me a picture of the wicked processes the govals in Calcutta adopted to extract the last drop of milk from their cows and buffaloes. I also had the feeling that, just as meat was not man”s food, even so animal”s milk could not be man”s food. So I got up in the morning with the determination to adhere to my resolve to abstain from milk. This greatly relieved me.”

“I am willing to yield on all points except one about which I beg you not to press me. I will not take milk, milk-products or meat. If not to take these things should mean my death, I feel I had better face it.”

At this point, Gandhi had become very ill….

“Dr. Kanuga came and pleaded with me to take medicine. I declined. He offered to give me an injection. I declined that too. My ignorance about injections was in those days quite ridiculous. I believed that an injection must be some kind of serum. Later I discovered that the injection that the doctor suggested was a vegetable substance, but the discovery was too late to be of use.”

“Two or three suggested meat broth as a way out of the milk vow, and cited authorities from Ayurveda in support of their advice. One of them strongly recommended eggs. But for all of them I had but one answer-no.”

“For me the question of diet was not to be determined on the authority of the Shastras. It was one interwoven with my course of life which is guided by principles no longer depending upon outside authority. I had no desire to live at the cost of them. How could I relinquish a principle in respect of myself, when I had enforced it relentlessly in respect of my wife, children and friends ? This protracted and first long illness in my life thus afforded me a unique opportunity to examine my principles and to test them. One night I gave myself up to despair. I felt that I was at death’s door.”

“A Doctor now suggested a reform in my diet. Said he ‘I assure you that you will have more energy and regain your strength quicker if you take raw eggs. Eggs are as harm less as milk. They certainly cannot come under the category of meat.

And do you know that all eggs are not fertilized ? There are sterilized eggs in the market.’ I was not, however, prepared to take even the sterilized eggs. But the improvement was enough to give me interest in public activities.”

Part 5 – The Rowlatt Bills and My Dilemma

“Dr. Dalal said “I cannot rebuild your body unless you take milk. If in addition you would take iron and arsenic injections. I would guarantee fully to renovate your constitution”. “You can give me the injections,” I replied, “but milk is a different question; I have a vow against it.” “What exactly is the nature of your vow ?” the doctor inquired.”

“I told him the whole history and the reasons behind my vow, how, since I had come to know that the cow and the buffalo were subjected to the process of phooka, I had conceived a strong disgust for milk. Moreover, I had always held that milk is not the natural diet of man. I had therefore abjured its use altogether.”

“Kasturbai was standing near my bed listening all the time to this conversation.

“But surely you cannot have any objection to goat”s milk then,” she interposed.

The doctor too took up the strain. “If you will take goat”s milk, it will be enough for me,” he said. I succumbed. My intense eagerness to take up satyagraha fight had created in me a strong desire to live, and so I contented myself with adhering to the letter of my vow only, and sacrificed its spirit.”

“For although I had only the milk of the cow and the she-buffalo in mind when I took the vow, by natural implication it covered the milk of all animals. Nor could it be right for me to use milk at all, so long as I held that milk is not the natural diet of man. Yet knowing all this I agreed to take goat”s milk.”

“The will to live proved stronger than the devotion to truth, and for once the votary of truth compromised his sacred ideal by his eagerness to take up the stayagraha fight. The memory of this action even now rankles in my breast and fills me with remorse, and I am constantly thinking how to give up goat”s milk.”

“But I cannot yet free myself from that subtlest of temptations, the desire to serve, which still holds me. My experiments in dietetics are dear to me as a part of my researches in ahimsa. They give me recreation and joy. But my use of goat”s milk today troubles me not from the view-point of dietetic ahimsa so much as from that of truth, being no less than in breach of pledge. It seems to me that I understand the ideal of truth better than that of ahimsa, and my experience tells me that, if I let go my hold of truth, I shall never be able to solve the riddle of ahimsa. The ideal of truth requires that vows taken should be fulfilled in the spirit as well in the letter. In the present case I killed the spirit-the soul of my vow by adhering to its outer form only, and that is what galls me. But in spite of this clear knowledge I cannot see my way straight before me.”