Members of the Jain community are very familiar with the idea of using diet to address ethical issues in food production. From avoiding meat, fish, eggs and honey, to only drinking boiled water and avoiding green leafy vegetables during the rainy season – the traditional Jain diet was pioneered to nourish the human body while minimising harm to the other living beings we share the planet with.

Jains living in the West now face an unprecedented degree of choice when it comes to food.  Modern farming and processing techniques mean that we are able to eat an incredible range of foods from all over world at any time of year. This is a wonderful luxury, but is not without cost.  We are now more divorced from food production than at any other time in human history.  Very few of us know where our food is grown, how it is made, or how it is transported.

Over past few years, I have spent a considerable amount of time investigating contemporary issues in the ethics of food. As adherents of the principle of Ahimsa, I believe the Jain community should pay great attention to these issues too.

In this article I shed light on some of the issues I have uncovered, and offer some tips on how we can reduce the hinsa footprint of our food choices. In particular, I highlight how some initiatives such as “organic” and “slaughter-free milk” actually involve much more violence than first meets the eye. And why several traditional Jain practices are very useful for those seeking to reduce the “hinsa” footprint of their diet. 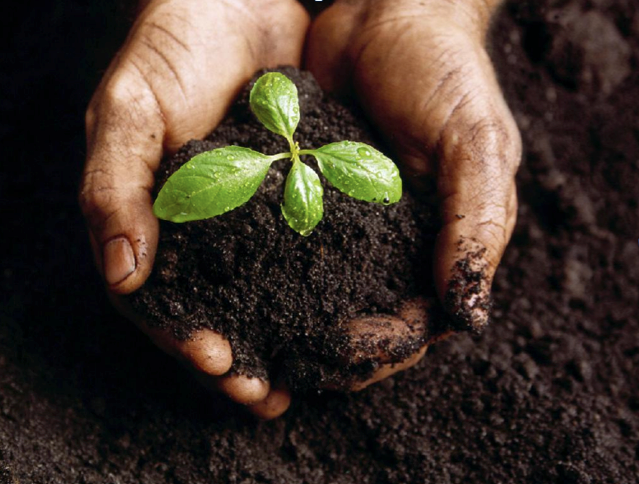 Blood and bones in organic vegetables…

Organic food is widely considered to be the cornerstone of the ethical food movement.  In order to be certified organic, foods must be grown without artificial pesticides and fertilisers.  In principle, this sounds completely consistent with the principle of Ahimsa and ideal for Jains in the West.

In practice however, the ethics are less clear-cut. Instead of using petroleum-based fertilisers, organic farmers generally use crushed (animal) bones and blood instead.  By purchasing organic fruits and vegetables, we actually provide a subsidy to the meat and slaughterhouse industries.

In reality, it seems neither organic nor non-organic foods are ideal.

TIP 1: Grow your own fruits and vegetables.  In addition to being a healthy physical activity, growing your own foods is one of the only ways to ensure your foods are free of harmful pesticides and not fertilised with bones or blood.

TIP 2: Support stock-free organic farms such as Tolhurst Organic Farm. These farms apply organic principles, but do not use animal products (blood, bones or manure) in farming. It is currently hard to get hold of their produce in London, but accessibility will improve with increased support.

Many in the Jain community are now aware that the treatment of cows in contemporary dairy farms is unacceptable.

There is also increasing recognition that organic milk is not the solution: dairy cows on organic farms are killed long before they would naturally leave their bodies, and male calves born to these cows are killed days after birth.

As a response to the killing of cows in mainstream dairies, a number of slaughter-free dairy milk products have launched in recent years (including ‘Cow Nation’ and ‘Ahimsa Milk‘).  While these products are an improvement over conventional/organic milk, the unfortunate truth is that the producers of slaughter-free milk still sexually violate cows.

In order to guarantee a regular supply of milk, producers extract semen from bulls and forcefully make cows pregnant using artificial insemination. This is a degree of violence to five-sensed beings that I believe most adherents of Ahimsa should consider unacceptable.

TIP 3:  If you don’t want to cause harm to cows or other animals, the best course of action is not to go for “ethical animal products” but to avoid animal products altogether and to go for plant-based alternatives instead.

TIP 4: If you want to do something to help cows and other animals, consider offering support to an animal sanctuary that lets animals live out their lives without exploitation such as Hugletts Wood Ahimsa Farm. 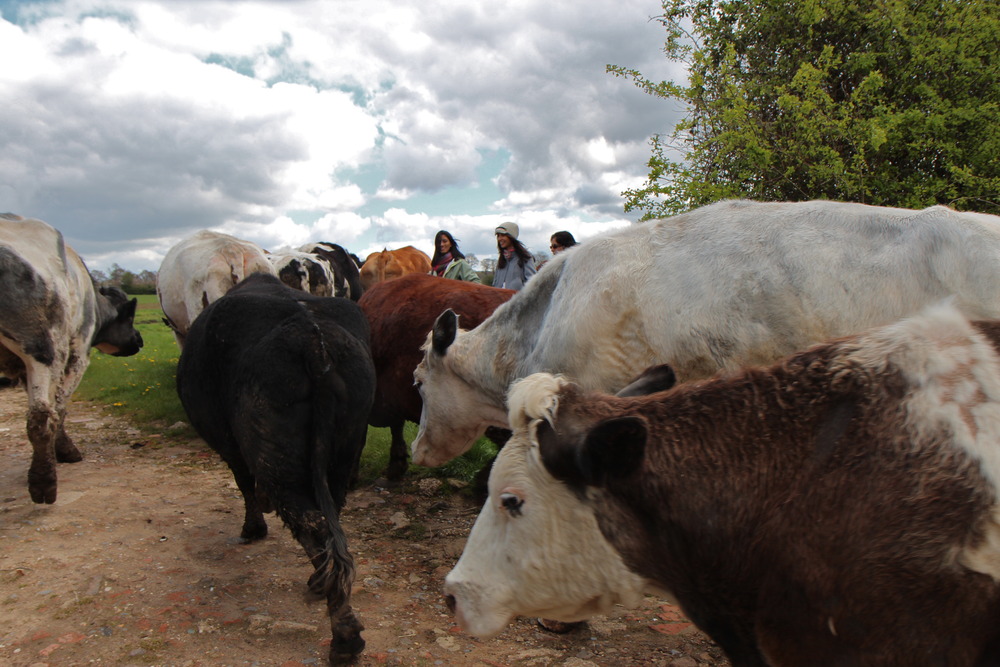 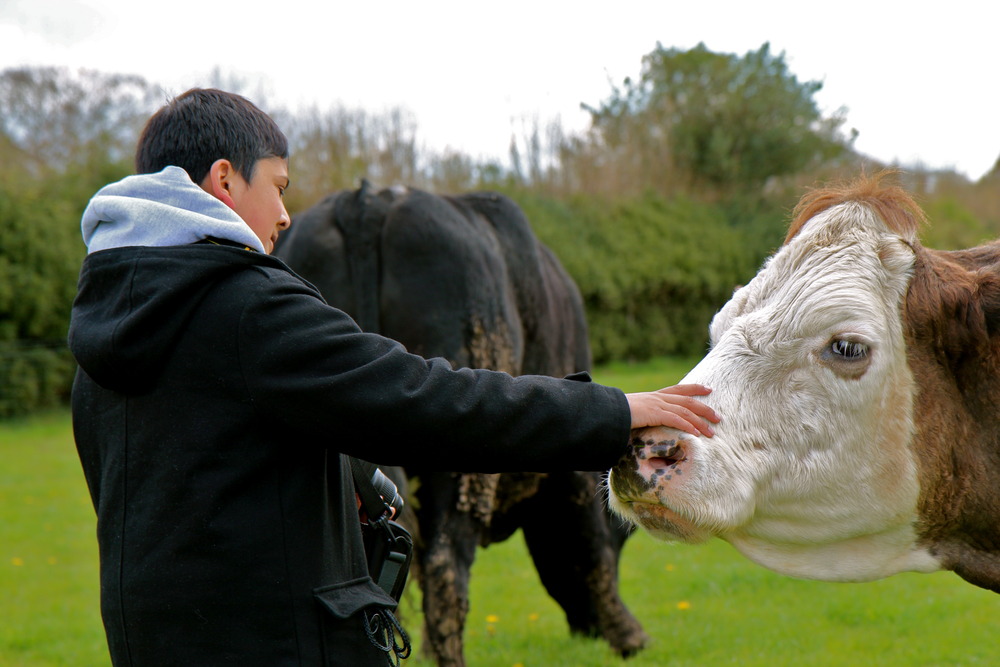 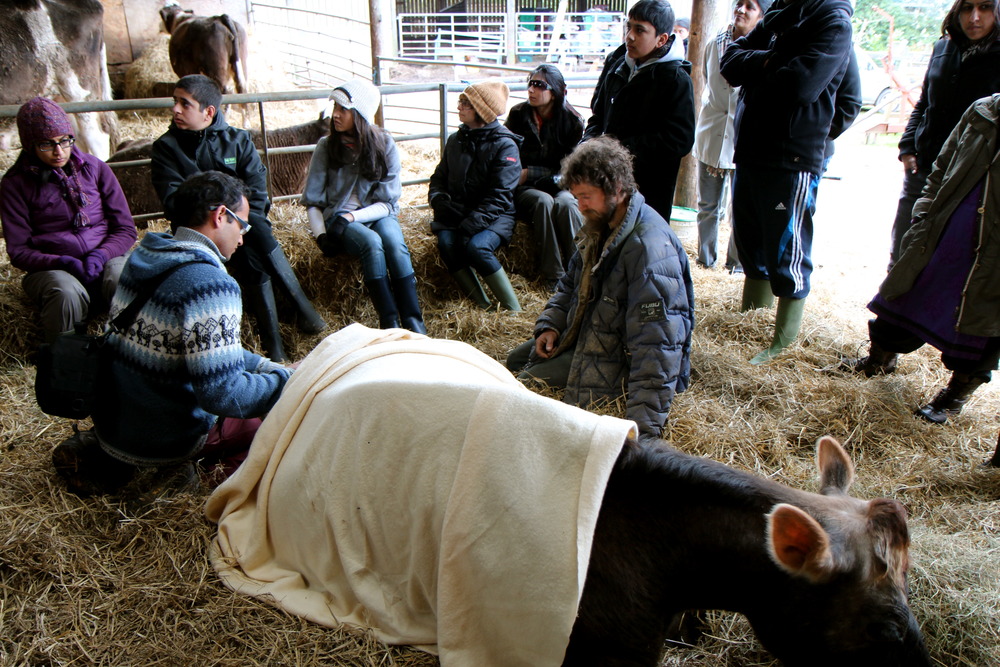 Members of the Jain community at Hugletts Wood Ahimsa Farm

Palm oil is common ingredient in many processed foods. The oil is affordable, incredibly efficient to produce, and has many useful culinary and industrial properties. Unfortunately, palm oil is also associated with the destruction of primary rainforest in Malaysia and Indonesia – the habitat of Orang-utans.

It is a big challenge to identify and avoid foods that contain palm oil.  Most companies simply label palm oil as “vegetable oil” or “vegetable fat”. Some companies claim to use “sustainable palm oil”, but there is wide recognition among environmental groups that the certification process is deeply flawed.   One helpful rule of thumb is to look at fat content. If “vegetable fat” is an ingredient, and the percentage of saturated fat (of total fat content) is higher than 30%, destructive palm oil is probably an ingredient. 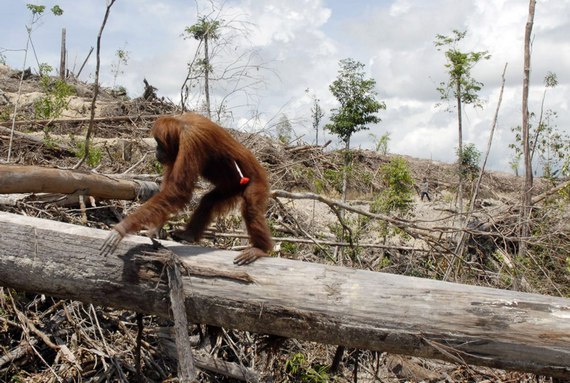 Soya is another food commonly associated with rainforest destruction.  But I believe soya should be less of a concern for Jains in the West.  Globally, the biggest producer of soya is the US.  And a vast majority of soya is used to feed animals (including dairy cows), not humans.  Moreover, soya is generally very clearly labelled as an ingredient, and in the UK it is easy to find soya products that have been produced in a sustainable, non-destructive way.

TIP 6: Avoid animal products and highly processed foods containing soya.  If you choose to consume soya, go for lightly processed products (e.g. soya milk, tofu) that are specifically labelled as being produced in a sustainable way.

Out of season vegetables “worse than beef”…

Vegetarians and vegans are often very proud that their diets are recognised to be good for the environment. The unfortunate truth however is that many out-of-season vegetables we consume in the UK are considerably worse for the environment than meat. 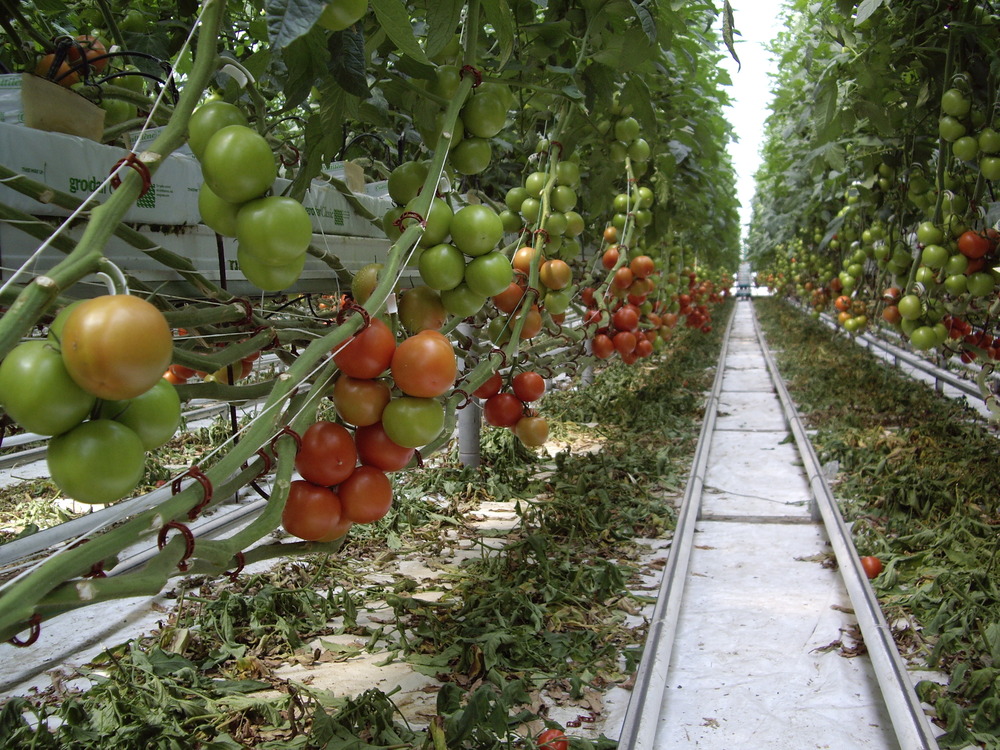 The reason is that to grow summer vegetables like tomatoes in the winter, it is necessary to use heated greenhouses – an absolute disaster for the environment. The same applies to many other popular foods like strawberries and peppers.  Although it sounds counter-intuitive, during the winter months, tinned tomatoes imported from overseas do a lot less damage than ‘fresh’ tomatoes grown in the UK.

TIP 8: In addition to avoiding harmful pesticides and fertilisers, growing your own food can help build awareness of when products bought in shops are in season, and when they are likely to be grown in heated greenhouses.

TIP 9: Traditional Jain foods such as grains, beans pulses and lentils can be stored for a long time and are a good choice when your favourite fresh fruits and vegetables are out of season.  Daal and rice can be enjoyed all year round.

Mangoes are terrible for the environment too…

Unfortunately, even some fruits and vegetables which we normally think of as being ‘in season’ can be disastrous for the environment too.

Many Indians in the UK look forward to the summer months when fruits like mangoes and papaya are in season.  But these fruits are so perishable that they can’t be shipped – they need to be air freighted.  This means they are as disastrous for the environment as foods grown in heated greenhouses.

Other fruits, such as bananas and apples can be shipped from the southern hemisphere when out of season in the North, and generally have a far lower environmental footprint.

TIP 11: If, like me, you are unable to resist the urges to consume perishable exotic fruits like mango and papaya – try and go for the dried versions which can be shipped and thus are a lot less damaging for the environment.

In the UK, we waste about 25% of the edible food that we buy, mainly because we buy too much!  One of the easiest ways to reduce the himsa arising from our dietary choices is to simply reduce the amount of food that we waste. 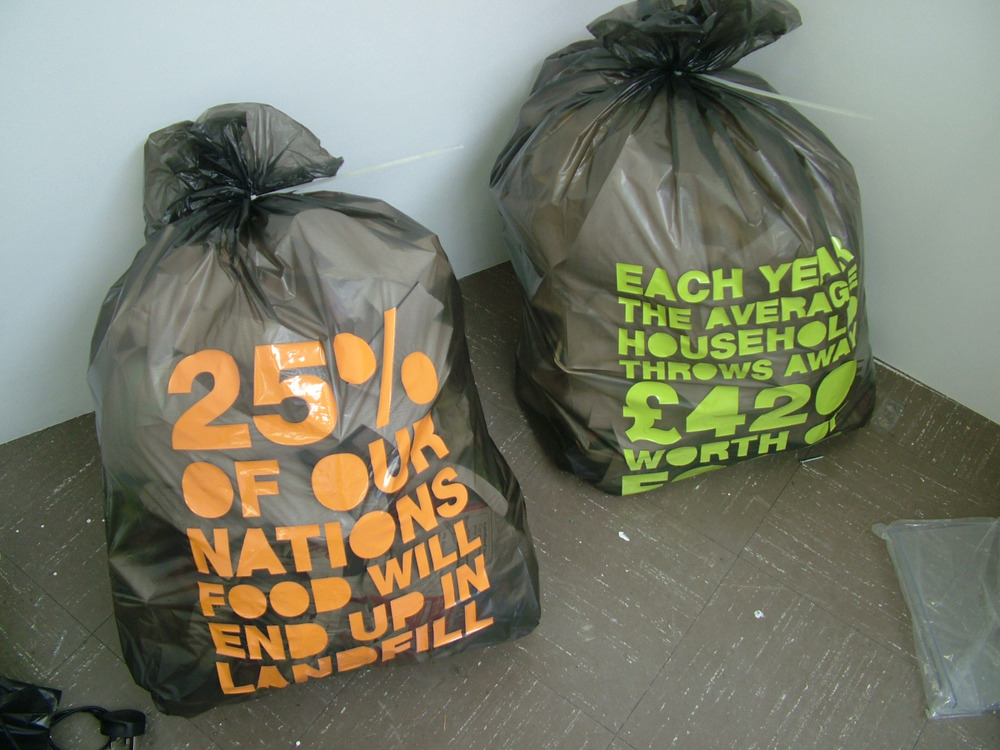 TIP 12:  Some waste can be reduced by making more of the food we do eat (for example, eating bread crusts and fruit peel).

TIP 13: Following a traditional Jain diet which involves lots of beans, lentils, pulses and grains is a great way to reduce food waste.  These items can be bought in bulk, stored for long time, and cooked in small quantities as and when required.

Ethical food is a challenge, but Jainism helps…

Some people may read this article and feel that trying to adhere to a diet truly consistent with Jain principles in the Western world is a big challenge.  I would agree.

But accepting that it is a big challenge doesn’t mean that we should give up or not pay any attention to these issues at all.  We all need to eat to live, and will inevitably end up eating a huge amount over the course of our lives. Over thirty years, even very small dietary changes can have a huge impact.

Some of the suggestions I have put forward (such as giving up cheese, fresh mango and papaya) may seem unpleasant or unenjoyable.  Fortunately, Jainism teaches us why making changes to our diet may be in our own interests, and offers many tools to help us make changes in our life.

Jainism teaches us how the pleasure we gain from luxurious foods is temporary, and how our attachments to food may  actually be a source of suffering.  The suffering is not just experienced by those who are adversely affected by dietary choices, but by ourselves too. We suffer when we are unable to obtain the foods we are attached to, and we may also bind karma when we consume them too.

Jainism also provides many tools to help practice the art of detachment (vairagya). For example, fasting on a regular basis helps us detach ourselves from food and develop control over our senses and taste buds. If we are able to detach ourselves from the need to have luxurious and rich tasting food at every meal and recognise it is possible to nourish our bodies with relatively little – all meals can become fulfilling, even on a very simple, restricted, ethical diet.

To conclude, the ethics of food in the Western world are complex, with many “ethical food” products actually involving far more violence than meets the eye.  Following a diet truly consistent with Ahimsa is a big challenge. But by following some simple suggestions and using the tools offered by Jain teachings and traditions, it is very possible to gain greater control over our taste-buds and reduce the negative impact our dietary choices have on ourselves and the world around us.

An earlier version was published in the November 2012 issue of the Young Jains Magazine.  Thanks to Jyoti Mehta and the Jain Vegans team for helpful comments and suggestions.