Lacto-vegetarians and the fallacious belief that consuming milk saves cows from being killed for meat.

Although there is widespread awareness of the cruelty in milk production among lacto-vegetarians, many hold the belief that consuming milk is somehow necessary in order to prevent dairy cows from being killed and used for meat.  In this post, I explain why this belief is deeply misguided, and show how dairy consumption actually causes millions of cows to be forcibly brought into existence and then subsequently killed.  I then explain why if an individual truly cares about the plight of cows, a far better solution would be to stop consuming dairy products AND to support animal sanctuaries that care for retired dairy cows.

Over the past five years, I have spent a considerable amount of my free time disseminating information to the Indian lacto-vegetarian community about the cruelty inflicted on cows in milk production.  While I’ve found that almost all in the community appear to care deeply about the plight of cows and share the view that that the treatment of cows on modern dairy farms is unacceptable, many maintain a deep-rooted belief that the consumption of milk is somehow necessary to prevent cows from being killed and used for meat.

Unfortunately, this belief is flawed, and appears to be based on a fundamental misunderstanding of how the dairy/beef industries operate.  Worryingly, the belief appears to be held not just by lay people, but also by authoritative individuals who are widely respected in their communities for their intelligence, integrity and religious knowledge.

While I wholeheartedly believe that the individuals and communities who maintain this belief are good natured and well-intentioned, as someone who has spent significant amounts of time studying the dairy industry (for professional reasons) and the options to reduce suffering imposed on cows by humans (for reasons of compassion), I believe it is my responsibility to inform others about the link between dairy industry and the killing of cows and the potential damage caused by misguided beliefs.

In this post, I set out the basic argument underpinning the belief that milk saves cows from being killed, explain the flaws with this argument, and explain in detail why/how milk consumption actually causes the number of cows killed to increase. 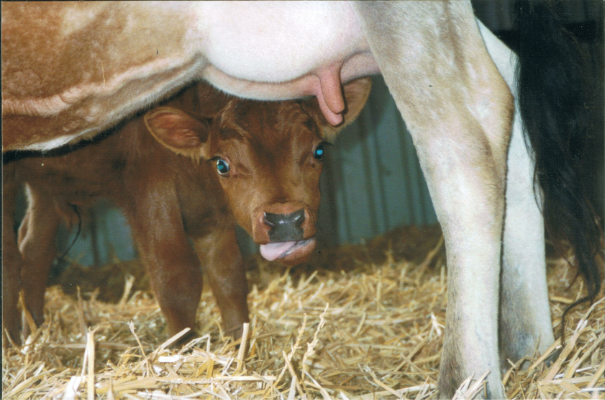 The argument made by people who believe consuming milk saves cows normally goes as follows:

On first inspection, the argument may appear to make intuitive sense, especially  to someone who doesn’t know much about the dairy industry.  It is also appealing for lacto-vegetarians who are uncomfortable about the way in which cows are treated on dairy farms – it suggests that consuming milk is “the lesser of two evils” and is so morally justifiable, even though cows are treated badly.

The first (and most significant) flaw is factual.  Milk consumption doesn’t prevent dairy cows from being killed and used for meat, in fact, it is quite fair to say that the opposite is true.

The demand for milk is responsible for bringing millions of cows into existence – cows which would not have otherwise been born.  Each and everyone of these cows is killed long before it would naturally die, and the economic reality faced by dairy farmers means they would be killed even if there was no demand for their meat (as is the case for male calves).   If anything, the milk industry provides a subsidy to the meat industry by providing a supply of cheap meat.  If everyone stopped drinking milk, the process of bringing cows into existence, abusing them and killing them prematurely would be eliminated – saving millions of cows from being killed.  I explain why this is the case in further detail below.

How milk production causes cows to be killed

Fact 1:  Cows need to be made pregnant in order to give milk.

Just like humans and all other mammals, cows produce milk to feed their offspring.  If a cow is not pregnant or has not recently given birth, it will not produce milk.

Fact 2: In order to meet the demand for milk, millions of calves are brought into existence.

Worldwide, there are estimated to be 265million dairy cows.  If each and everyone of these cows is to produce milk, they will each need to be made pregnant, and millions of calves will be born.

Fact 3: Cows on modern dairy farms do not become pregnant naturally.  They are forcefully impregnated by farmers through artificial insemination.

There are two mains reasons for this.  The first is economic.  It is very expensive to maintain bulls, and (as is explained below) most dairy farmers kill bull calves shortly after birth.  Artificial insemination methods allow one bull to fertilise far more cows than it would be able to do naturally, reducing costs for farmers.  The second reason is that artificial insemination facilitates selective breeding.  By using bulls from families with exceptionally high milk yields, farmers can ensure that the next generation of dairy cows will also produce high milk yields

Conclusion from facts 1 to 3:  The demand for milk requires millions of cows to be brought into existence.  In the Western World at least, this process does not happen naturally.  The process of bovine reproduction is actively managed by farmers using artificial insemination.

Fact 4: Female calves are retained for dairy production, but male calves born to a dairy cow are typically killed shortly after birth.

Female calves born to a dairy cow are typically kept on by farmers to become milk-producing dairy cows like their mothers.  Male calves, on the other hand, are very expensive to maintain but have very little commercial value to the farmer (they are normally wrong breed of cow to be reared specifically for meat/beef).  In the UK, they are typically shot dead a couple of days after birth.  This process was recently exposed on a Channel 4 Programme called “Jimmy and the Giant Supermarket” (which can be watched below).

Fact 5: Dairy cows are typically sent to slaughter before the age of 10, even though they could naturally live for more than 20 years.

Once a cow has been through several cycles of being made pregnant, giving milk, and giving birth, the amount of milk it produces per day decreases.  There reaches a point, typically between the age of 5 and 10, when it no longer makes economic sense for a farmer to continue to use an older dairy cow (called a “spent cow”) for milk production, since they can be replaced by a younger, more productive cow (the supply of which is abundant).   Since it is very expensive to look after cows if they do not provide any economic returns, the older cows are typically sent straight
to the slaughterhouse.

Fact 6: Spent dairy cows are typically used for meat and leather.  But they would still be sent to slaughter even they weren’t.

Even if the demand for meat/leather didn’t exist, older dairy cows would still be sent to slaughter because it wouldn’t make financial sense for a farmer to keep them.  In countries like India where beef consumption is low, cows at modern dairy production units are either abandoned or sent for slaughter (I know this because I spent a considerable amount of time researching the dairy industry in 2007, where I developed a loan product for dairy farmers in rural India for ICICI Bank Mumbai).

Conclusion from facts 3 to 6: The expense of maintaining cows means that bull calves and older, less productive dairy cows are sent to the slaughterhouse and killed.  While older dairy cows are typically used for meat, they would be killed even if they weren’t – so the dairy industry is best seen as providing a subsidy to the meat industry in that it provides a cheap source of meat.

Once one has a clear understanding how the dairy industry operates, it is clear to see that the dairy industry, irrespective of the demand for meat, is responsible for bringing millions of cows into existence and for killing them long before they would naturally die.

So what would happen to the dairy cows if the demand for milk disappeared? And what is the solution?

If the demand for milk disappeared, the process of bringing millions of cows/calves into existence in order produce milk would be eliminated, and so the subsequent killing of millions of cows would be avoided.

That said, if the demand for milk disappeared, the current cohort of dairy cows would lose value to the dairy farmers, and the dairy farmer would be faced with little choice other than to lose money maintaining them, or to send them to the slaughterhouse.

This is clearly not an ideal situation for anyone who cares about cows.  But it is important to see that consuming milk is NOT the solution to this problem.  As has been argued above, the cows would end up in the slaughterhouse in a couple of years anyway, and the consumption of milk simply guarantees that future generations of cows are destined for the same horrible future.

The best solution to prevent cows from being killed is to provide support for animal sanctuaries such as Hugletts Wood Ahimsa Farm, that take on retired dairy cows (and other cows destined for slaughter) and look after them with compassion and care until the animals naturally leave their bodies.