The latest results of the Jain Vegans survey show that, after finding out about how cows are abused and killed in the milk production process, only 13% of Jains believe that it is acceptable to consume milk.

Over the past year,  a UK based grassroots campaign group called Jain Vegans has been surveying members of the Jain community who visit their information stall at festivals and events.  The survey, which only has four questions, asks Jains whether they are aware that cows are forcibly impregnated and routinely killed in the milk production process, and whether, knowing that cows are killed, they believe it is acceptable for Jains to consume milk.

Jains Vegans has now received completed forms from over 200 respondents (predominantly from the Oshwal Mela and Navnat Mela in 2011, and the Mahavir Foundation Prathistha at Harrow Leisure Centre in 2012).  The results are startling. 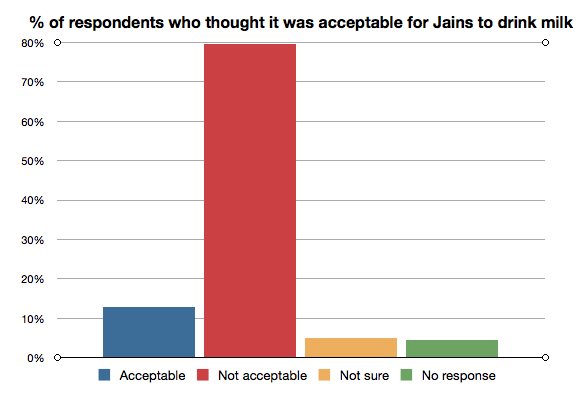 Unfortunately, the survey only had simple yes/no questions, and so could not reveal how sophisticated respondents’ understanding of the milk production process is (for example, whether they were aware that bull calves are typically killed after birth AND that cows are typically killed by the age of 10, despite being able to live to 20).

Nevertheless, it was positive to see that over 85% of respondents were interested in finding out more about what they could do to help stop the unnecessary killing of cows in milk production. 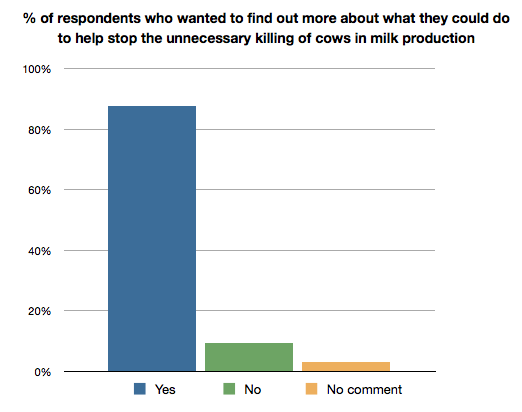 The results are very helpful for the work that Jain Vegans does in helping Jains transition towards a peaceful and more compassionate lifestyle.  First, the high number of respondents who believe it is not acceptable for Jains to consume milk, will prove useful when attempting to persuade organisers of major Jain events that the menu should be free of dairy products (some Jain organisations, such as Young Jains UK, now already try and ensure the catering at all their events are vegan).  Second, the information obtained about awareness of the cruelty in milk production, will help Jain Vegans tailor its campaigns to have the best possible impact.  Given some of the respondents believed that milk was necessary for reasons of health or survival, it might be appropriate for Jain Vegans spend more resources disseminating the evidence showing that milk and dairy products are not necessary for vegetarians to live a long and healthy life.

Jain Vegans will continue to administer the survey at events where it hosts an information stand, and will update the results as and when the completed forms become available.